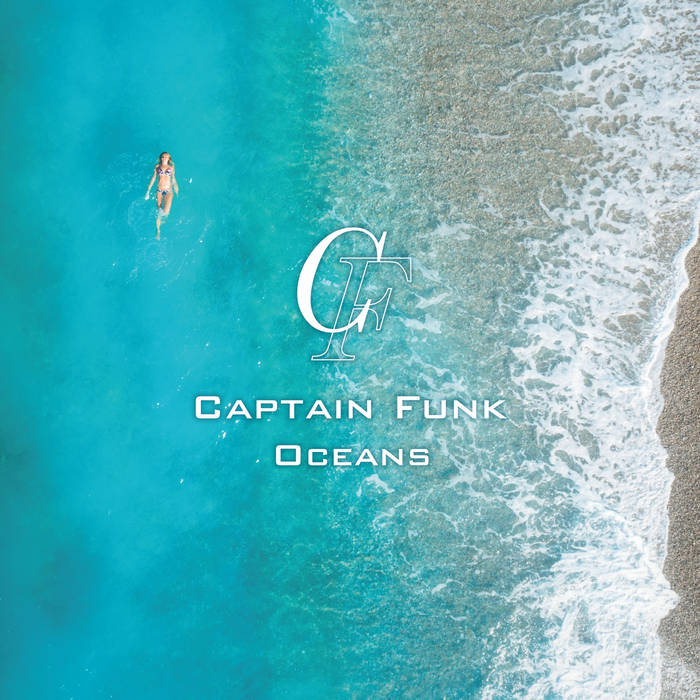 Tatsuya Oe, who has achieved much acclaim as Dark Model over the past five years, has now released his new album under his longest-standing moniker, Captain Funk. “Oceans” takes you on a breezy and uplifting voyage through 10 instrumental tracks in the style of futuristic funk, electronic jazz, and tropical dance music.

“Oceans,” the first fully-instrumental album under the moniker of Captain Funk, begins with the cinematic electro “Big Blue,” followed by “Running,” a brisk AOR/yacht rock-esque electro house track. “Pacific,” dramatic and upbeat disco funk and “Voyager,” a driving fusion/jazz-oriented track, are the highlights of the album. Laid-back synth funk tracks such as “Dolphins” and “Night Dive” will make a nice addition to the recent “future funk” scene. Chilling “Underwater” and smooth-jazzy “Rakuen” featuring nylon guitar sounds, which change the flow of the album, contribute to enriching the whole story. “Back to the Island,” the closing melodic house track featuring reggae-type (backbeat) synth riffs, lets us bask in the afterglow of summer.

Captain Funk is the longest-standing project of award-winning music producer Tatsuya Oe. Under the moniker, Oe has created original electronic music inspired by the sounds that influenced him in his youth, such as funk, disco, synth pop, and house music. In its '98 debut album "Encounter with…," he exemplified unique sound by fusing old-school funk and state-of-art techno sound. Oe has earned praise from DJs across the board, including Coldcut, Carl Cox, Freddy Fresh, and Chemical Brothers for his infectious grooves. Fatboy Slim (Norman Cook) described "Bustin' Loose EP ('99)" as "F***ing insane!" and demanded extra copies. "Songs of the Siren ('00)," his most rock-oriented release yet, won "The Year in Music 2001" from the Billboard Magazine. In the releases of '07 "Heavy Metal," "Heavy Mellow," and '09 "Sunshine," Oe updated his early signature funky breaks/big-beat style with modern electro and synthpop sound. Catchy vocal tracks such as "Hey Boy, Hey Girl" and "Weekend" were ranked in several charts in Japan and South Korea. In the US, Captain Funk's songs have been featured in numerous media projects, from box office film trailers like "Money Monster" to TV dramas such as "Switched at Birth (ABC Family)" and "Younger (TV Land), and to advertising campaigns including Forever 21 and Adidas.

Captain Funk is the longest-standing project of award-winning music producer Tatsuya Oe. Under the moniker, Oe has created original electronic music inspired by the sounds that influenced him in his youth, such as funk, disco, synth pop, and house music.

Bandcamp Daily  your guide to the world of Bandcamp

Cannibal Corpse's George "Corpsegrinder" Fisher stops by for an interview